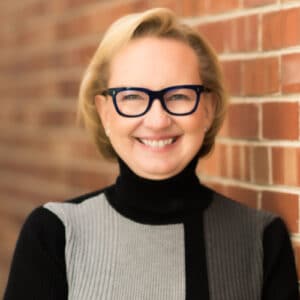 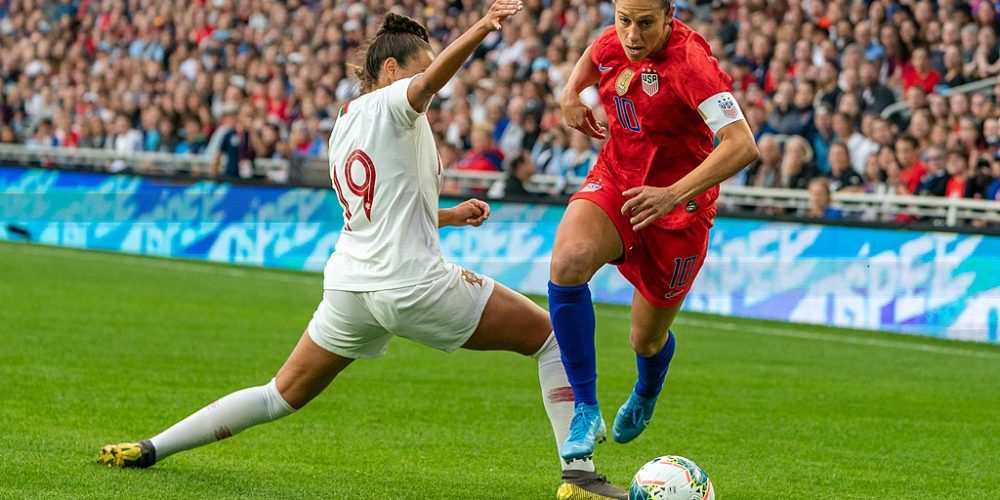 Hah, you say. What can an unapologetic, 39-year-old, soccer superstar teach me about kicking bootie in the business world? A lot, actually.

Carli wasn’t a child soccer prodigy. She had to work for everything she achieved. Hard. She said her first Olympics training camp in 2004 was a “big wake-up call.” Instead of backing down, she dug into the chance to play with the world’s best. That dedication paid off.

“Nobody is born a champion. I am who I am because of the hard work I put in when no one was watching.” — Carli Lloyd

If you watched the broadcast of Carli’s farewell match, or checked in on social media, you might have been privy to some of her moves via the “Carlicam.” Seeing them in person was breathtaking.

If you missed the match or (godforbid) aren’t into women’s soccer, here’s some perspective …

Lloyd is currently the second-most capped player in world soccer history with 315 games played and has scored 134 international goals, third in USWNT history, and fourth all-time in world history.

World. Soccer. History. Imagine someone saying that about you when you retire.

Lloyd was honored before and after the match to commemorate her contributions to the sport and the team. And, quite frankly, us. Because if there ever was a female leader we could learn from, it’s Carli.

Here then, without further ado, are four things Carli made patently clear during her astounding career.

You have to get a kick out of what you do for a living.

People who become superstars are obsessed with what they do. Carli is no exception. She was singularly focused on training hard, getting opportunities to play with the best, and using those opportunities to perfect her craft.

“Like many kids, I was thrown into recreational soccer in my town, and from there, I grew to love it. Everywhere I went, I carried a soccer ball with me.”

Carli never played soccer for the glory. She never cared whether you knew her name or not. She flat out loves the game. And that love showed up in her skills and abilities, the times she took a risky shot and made it, the times she knew to pass the ball to a better positioned team mate. That love is what propelled Carli to world soccer history status.

“At the end of the day, you can be physically strong, you can have all the tools out there, but if your mental state isn’t good enough, you can’t bring yourself to bigger and better things.”

Carli Lloyd teaches us that you can only play at your highest level if you are 100% engaged in what you do for a living. Passion is an overused word in the career advice arena these days. But that’s what we’re talking about here.

{ Read about 4 Leadership Lessons from the Olympics }

Playing through the pain doesn’t help the team.

I know, I know. We’ve been taught since we were tots to suck it up and power through the pain. Grin and bear it. Yadda, yadda. It turns out, that sort of self sacrifice doesn’t help you become a better player. And it definitely doesn’t help the team.

Her second appearance with the senior Olympic squad, she broke her wrist and continued playing. The young perfectionist learned a hard lesson. “There were times where maybe my focus was too intense,” she said. With the help of coaches and team doctors, she’s learned to put her health first so she can be there for her team…100%.

“It’s always hard to deal with injuries mentally, but I like to think about it as a new beginning. I can’t change what happened, so the focus needs to go toward healing and coming back stronger than before.”

Let’s face it. We all (but particularly women) have a long history of muscling through difficulties … to our own detriment. The thing is, when we don’t take care of ourselves, we’re not able to contribute our best effort. And that hurts, not just us, but all the people around us.

“I think recovery is around the clock. Are you sleeping enough? Are you hydrating enough? Are you stretching? Are you eating well? Pretty much everything that I do is a reflection of how I’m going to feel on the field. I take great pride in getting in an ice bath after training and just taking care of myself.”

Carli Lloyd  – and others who have been in the news, like Simone Biles and Diana Taurasi – have taught us that we need to make the hard choice to heal ourselves before we can be useful to our team mates. Making sure, first and foremost, that we’re able to play at our best, enables us to show up and contribute in ways that benefit everyone.

In sports especially, but also in our offices and boardrooms, we tend to deify individuals in a way that discredits everybody who helped that person realize their achievements.

A key differentiator – whether we are playing on a team or leading a division – is that we understand that success, progress, achievement is never about just one person.

Carli Lloyd didn’t play the diva, lone wolf, or get drunk on the spotlight. She knew that every win was a team win, not an individual’s moment of glory. She made sure her fans, the press, and her teammates knew how she felt. And her definition of team didn’t just include those on the field.

“This is a team sport. But there’s a team behind the team. And none of you see that … I am extremely grateful for all that you have done.”

Throughout her career, Carli embodied team spirit. She acknowledged and honored her teammates. Supported their efforts. Directed the cameras at others who made critical plays. And brought our attention to the people who matter when they were the linchpins to a big win.

“Thirty-four years I’ve been playing this amazing game … I just want to thank every single one of you for all of your support.”

Nurturing the next generation is a critical part of the game.

In last Tuesday’s farewell match, which was basically a Carli-fest, she came out of the game early to give Alex Morgan a chance to show her stuff. Morgan went on to score one goal, and assist another.

In doing so, Carli passed the soccer ball on to the next generation of players. In fact, throughout her career with the team, she worked hard to enable up-and-coming players, as Mia Hamm and Abby Wambach had done for her.

Carli took advantage of opportunities to coach and develop others. And her teammates love her for it. For 17 years, through 5 team coaches, even before she was captain, Carli was a constant who consistently challenged and pushed her other players to greatness.

“To hear the impact that I’ve had on so many younger players, that’s almost more rewarding than anything I’ve ever achieved.”

That’s something we can all learn from the soccer superstar: the game isn’t over until we’ve trained our replacements. Many of us, especially women, in leadership positions today didn’t have mentors, coaches, and people rooting for our success. We fought tooth and nail to climb the career ladder.

So it would be easy to think that our part is done. Mic drop. We’re out. But times have changed and the hard lessons we learned are of unfathomable value to the next generation of players in our organizations and industries.

Yes, mentoring takes extra time and effort. And we’re pretty exhausted from our own battles. But I can’t imagine a better way to leave a career than by inspiring those who will take what we’ve achieved to even greater heights.

Cindy’s Courage Challenge: This one’s easy. Take 15 minutes this week to ask yourself if you truly love what you do, if you’re taking care of yourself, what you’re doing for the team, and how you’re fueling the next generation. 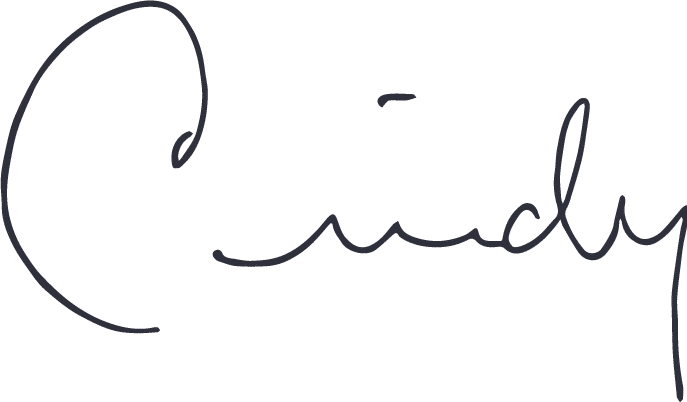 PrevPreviousFrom Now On, The Customer Comes Second
NextA Masterclass in the Art of Saying “No.”Next 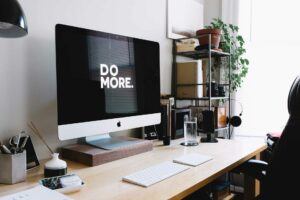 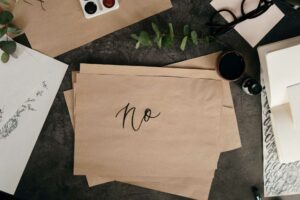 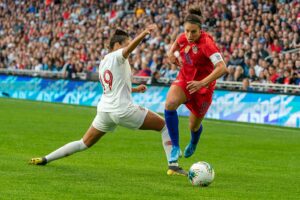 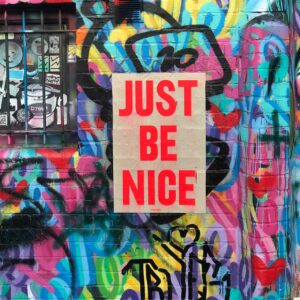 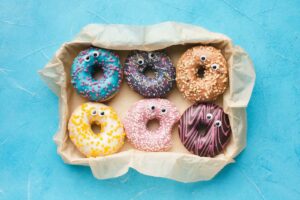 We Need to Talk About Your Return-to-Office Plan 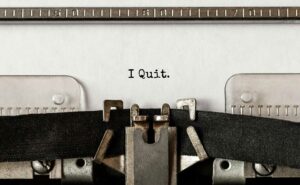 Don’t Be a Victim of the Great Resignation 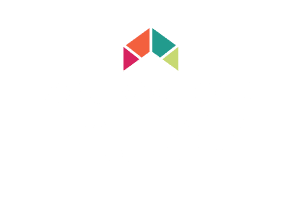